Venexia - Realm of the Vampire 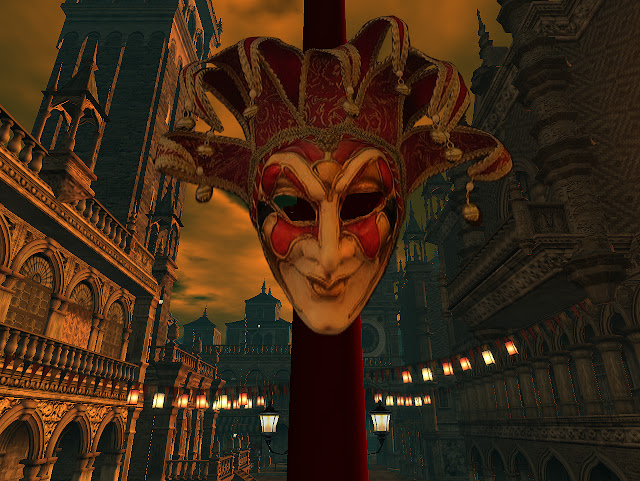 In medieval time, a great plague, pustulous and deadly, descended on the western world and decimated its human populations to the point of near extinction. Long hidden from the formerly greater society of humans, a society of Vampires emerged from the shadows to fill the void left by a weakened humanity, imposing a new social order, a dark realm  in which they are dominant. The court of this new vampiric social order is seated in the great maritime city of Venexia. Outside the city, a blood thirst reign of terror threatens those remnants of humanity. But, within Venexia, the vampires of the city abide by laws they promulgated to protect and preserve a stock of humans from predatory excess as the extinction of humanity would mean the extinction of their own kind as well. For their part, the human residents of the city are permitted to live a near normal life as long as they accept the rule of their vampire overlords and provide what is expected of them.  The city has developed its own style, culture, and social hierarchy in which vampires and humans coexist, uneasily, in this realm of the Venexian Vampires. So goes the story behind this fascinating role play.


Click on the pictures to enlarge them for better viewing. 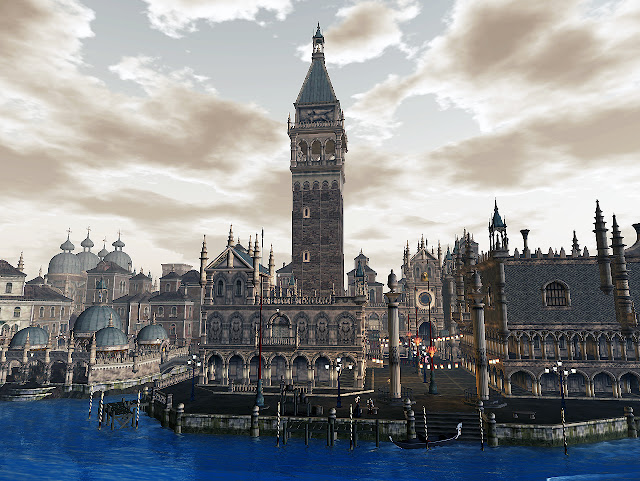 Venexia is a gothic vision of Venezia, the city of Venice. It is densely constructed as one would expect of a city with ancient medieval origins. This is not a faithful replication of Venice. One will not find a Rialto Bridge or Grand Canal in this city. Rather, it is an interpretation that evokes an atmosphere of fading opulence and demonic domination. The details one sees around you as you walk the city are incredible and must be experienced. Above all, Venexia is designed to be a thriving virtual community with public and private spaces including private residences. It provides a wonderful stage for its role play. And, even more than that, Venexia is a Second Life treasure. Kudos to Baal Zobel and Kora Zenovka, the builders and game masters of this treasure.

Visitors to Venexia need to obtain a visitor's tag before teleporting down to the city.  Once reaching the city, it is best to try to find your way to the Piazza Grande, a large public square that is a central meeting place for residents and visitors. Piazza Grande is recognizably inspired by the Piazza San Marco in Venice. Naturally, visitors should strive to be unobtrusive so as not to interfere with the role play.  But, I've met some very sociable role players who were more than willing to answer questions. Just use good judgement and courtesty when interacting with the role players. 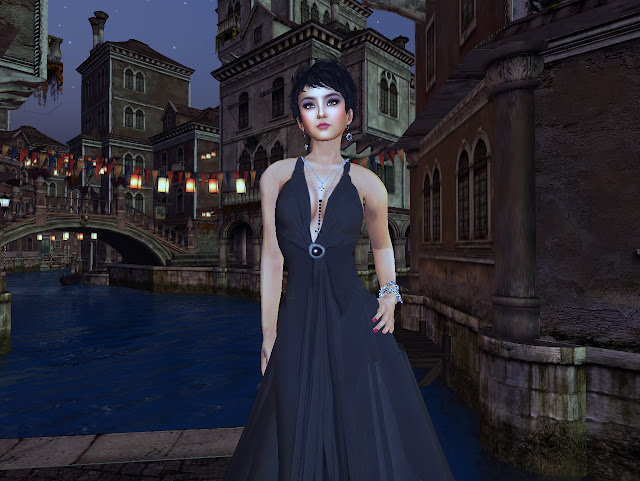 Venexia is a medieval city of canals and bridges. It's a walking city and a maze of walkways and alleys. Be prepared to be perpetually lost. But, you'll discover some charming open squares, grand buildings, and a marvelous shipyard. Venexia is a SL photographer's delight. I might even say that it can be charmingly romantic. However, there is a tension here from the underlying horror that permeates this city.

Entering Venexia, I went into the nearby tavern called The Green Dragon. On the menu, I had a choice of soup, stew, or blood. One can find offerings of bloody refreshments throughout the city. It must require an endlessly flowing river of blood to satiate an entire city of vampires every day, every week, every year. 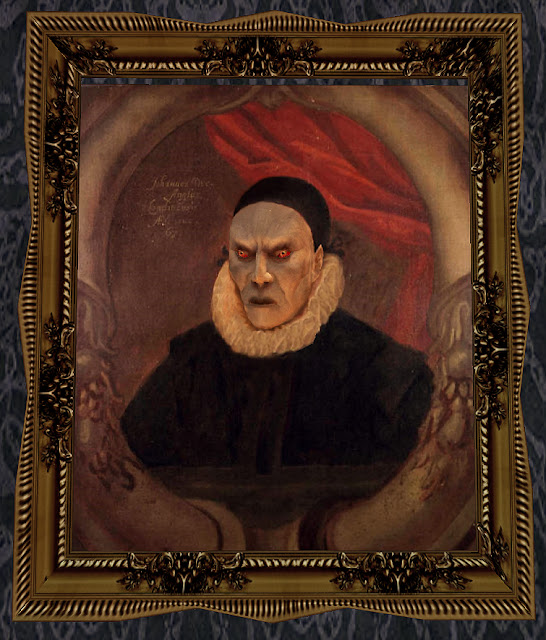 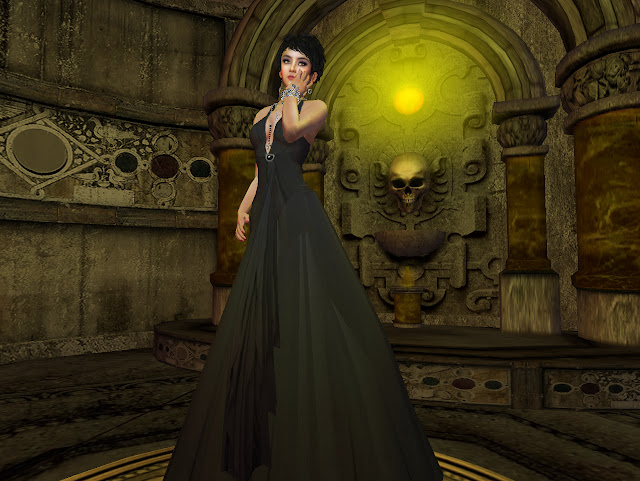 Vampires are powerful and arrogant. In Venexia, they will affect aristocratic tastes and assume aristocratic hauteur to those of lower social rank, human and vampire. They are reserved; but can be agreeably friendly. However, beneath that reserve and that smile lurks a suppressed bloodlust that can suddenly erupt in a demonic fury. Keep in mind the true nature of the vampire. They are undead corpses animated by the power on earth of them that fell from heaven. That nature was made evident to me when I wandered into the common lair of the Venexian vampires. The cold chill of terror descended on me. 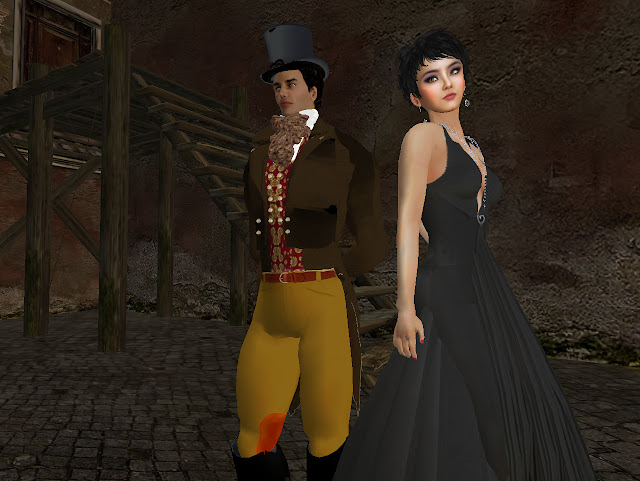 So, I called on Jaysun to accompany me. He arrived dressed in the fashion of 1830 Paris. Very handsome, I might add. It was very reassuring to have him here. The chill departed from me. And Jaysun was very impressed with this city. Our first stop was at Venexia's theater, The Teatro. 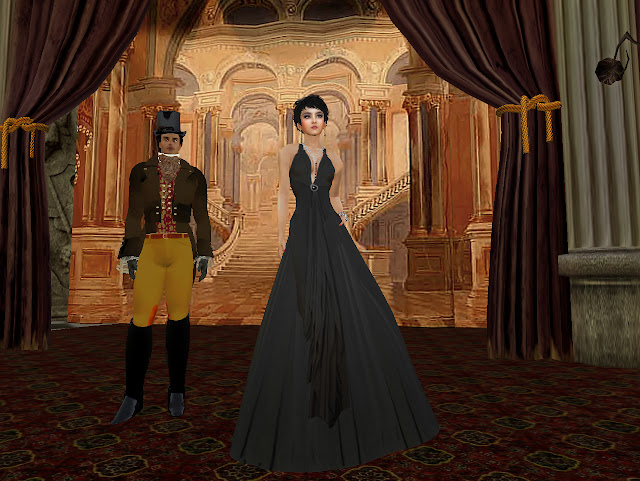 Vampires and Venexians appreciate and cultivate the arts. There is an active theater company that produces plays in this theater. A poster outside the Teatro announces the plays. The theater's interior is a delight. Jay and I walked onto the stage, imagined the applause and took our bows. The next attraction on our tour agenda is the basilica, Venexia's version of the Basilica di San Marco. 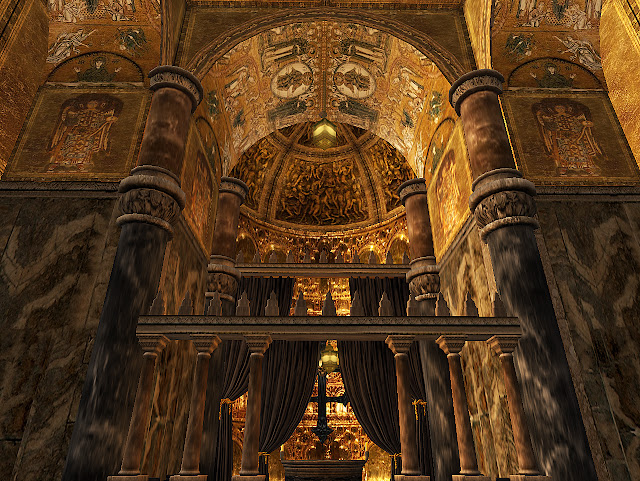 The Basilica is truly magnificent. But it is not a house of holy worship.
This is Venexia, the realm of vampires. This is unholy ground. 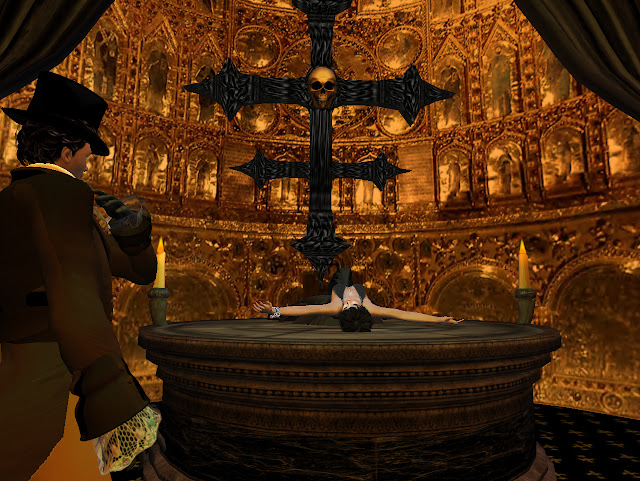 A touch and suddenly I found myself on the sacrificial alter of a Black Mass.
Jaysun gave out a warning. There is danger in this. 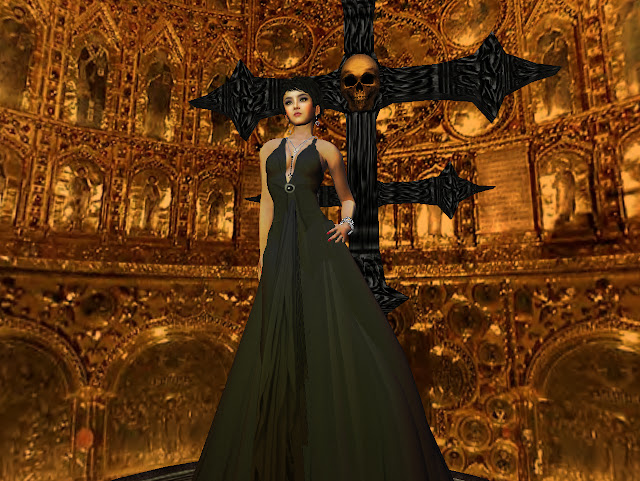 Jay was right. One should never dabble in such things. There are consequences.
I'm finding Jaysun's neck very tempting. 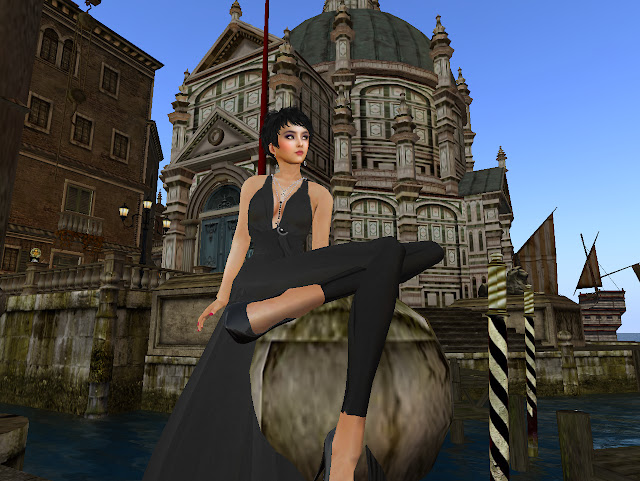 Venexia is part of the SGS game system. Information about Venexia and its role play can be found on the SGS website:

and also on the blog, Venexian Vampires: The Chronicles of Venexia

This post was recently featured in New World Notes

and in Eddi Haskell's Second Life (a really great blog)

The official website of the City of Venice. Take the virtual tour and virtually walk the streets of the city:

Another wonderful virtual tour of Venice is found on the Italy Guides website:

The dress that I am wearing is from MEB Fashion and is called Revello. Revello and other selections from the MEB collection are available at Mariko, my fashion boutique on the Grande Rue in Mont Saint Michel. 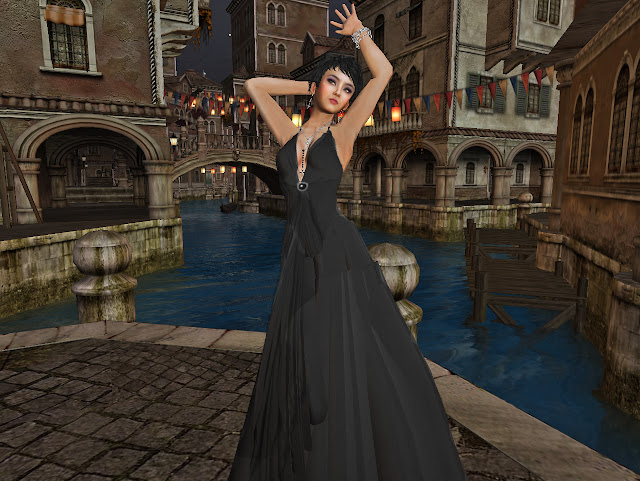 Posted by Mariko Nightfire at 4:38 PM

Welcome to Mariko Nightfire: A Virtual Life. Mariko Nightfire is the name of my Second Life self. Mariko is also my name in real life. I’m a Japanese-American girl from Hawaii and a graduate student at a university in the northeast. As an extention of me, so is Mariko Nightfire. But, she is far more than an extention. She is the Mariko in Wonderland. This blog records her adventures in wonderland and my thoughts on Second Life's culture and development. Her's is truly a fully realized life being lived in that alternative universe of pixels. In addition to Miss Nightfire's personal diary, my blog has an number of special features:
.
Mariko Magic: These are my fashion posts. I love the world of fashion in Second Life. There are some wonderful talents creating exceptional fashion in Second Life. This feature highlights them and their most magical creations. These posts also appear on my fashion blog : Mariko Magic - Fashion in Second Life.
.
Cheesecake Mariko: Mariko is cute and sexy - a pinup girl. This feature has Mariko at her cutest and sexiest.
.
Photo Mariko: I fill my postings with colorful pictures of the people, places, and events that are the subject of the post. But I have taken some pictures that do not make it into my regular posts and are interesting enough to share with you. I'll place those pictures in this feature.

Thank you so much for reading my blog - Mariko Nightfire
..

Shantu Selene (Play my favorite, Dance With Me)

Second Life® and Linden Lab® are trademarks or registered trademarks of Linden Research, Inc. All rights reserved. No infringement is intended.