The Great and Magnificent OZ

The time is 1939. It's the most magical year of Hollywood's Golden Age. Premiering that year were a parade of many of the most iconic and beloved films of all time - dramas, comedies, musicals, adventure, mysteries - 'The stuff that dreams are made of'.  Among the movies that premiered in 1939 were Dark Victory starring Bette Davis in her most favorite role, Ninotchka starring Greta Garbo, John Ford's Stagecoach starring a youthful John Wayne and his Drums Along the Mohawk with Henry Fonds and Claudette Cobert,  Mr. Smith Goes to Washington starring the marvelous James Stewart and Destry Rides Again with Stewart and Marlene Dietrich. Also premiering were Beau Geste, Ginga Din, The Women, Intermezzo, Goodbye Mr. Chips, The Story of Irene and Vernon Castile, Dodge City, Babes in Arms, The Hound of the Baskervilles, Wuthering Heights, Young Mr. Lincoln, Love Affair, The Private Lives of Elizabeth and Essex, The Hunchback of Notre Dame, Jamaica Inn, Only Angels Have Wings, and Of Mice and Men.  Gone With the Wind won the Oscar for Best Picture.  And The Wizard of Oz premiered, possibly the most beloved movie of all time.
Click on the pictures to enlarge them for better viewing. 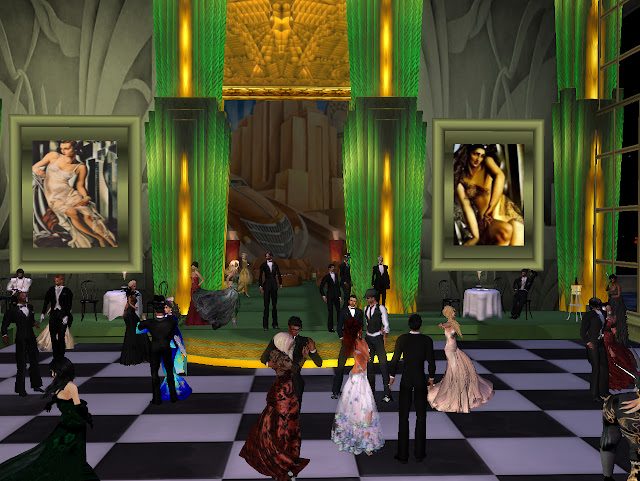 An exciting new nightclub and music venue opened last week at Calas Galahon Park that captures all the glamor and glittering glitz of  Hollywood's golden year. It's an art deco emerald city called OZ.  Jaysun and I were given a sneak preview of the club prior to its opening. As a fan of classic Hollywood movies, I was thrilled. Oz is a wonderful time machine that evokes the nostalgia of those magnificent movie palaces of yesteryear and the grand ballrooms of the era where couples danced to the music of the great swing bands and jazz orchestras. And there was no way that Jaysun and I would miss the grand opening of OZ. It was certain to be the A-List event in Second Life that week. And it was. 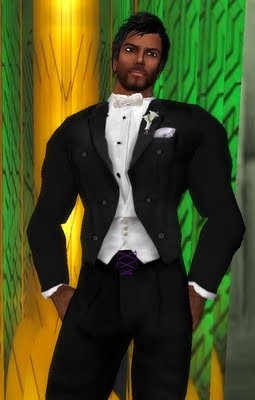 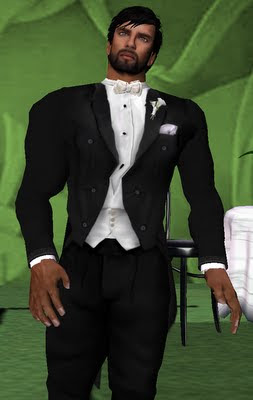 Truck Meredith and Tymus Tenk, owners of Calas Galahon Park. Creative, warm hearted, generous, funny ... these are some of the many adjectives that can used to describe these gentlemen. The two are Second Life treasures. 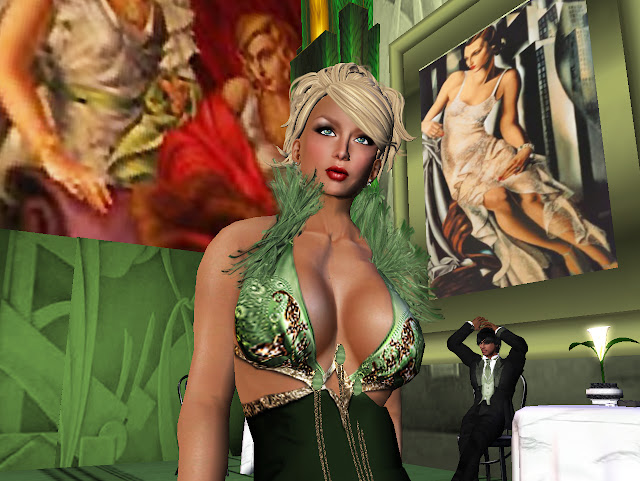 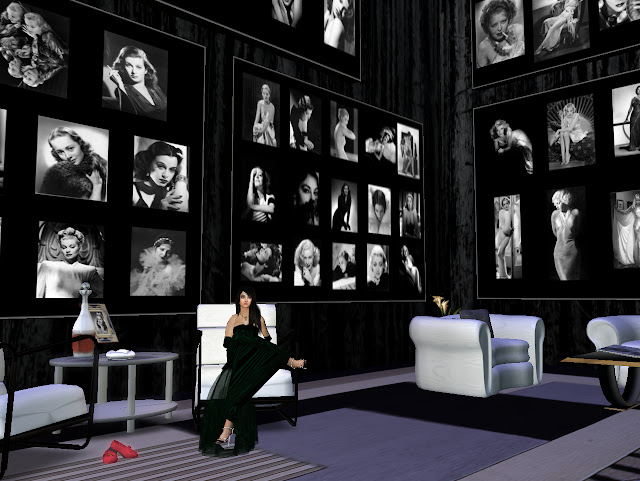 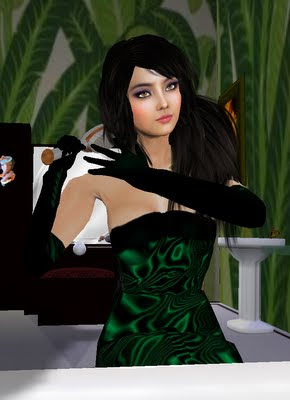 There's a ladies lounge at OZ for us girls to relax in and freshen up. That's such a thoughtful touch. Covering the walls of  the sitting area is a fantastic collection of studio portraits of the famous actresses and love goddesses of Hollywood's golden era. Many exhibit the strong shadows, deep rich blacks and pure whites that are hallmarks of the classic work of Hollywood's greatest studio photographer, George Hurrell. I guess gentleman are permitted to cam into the sitting room to view the collection. Just inform anyone in there and please don't cam beyond that. Oh, notice the Ruby Slippers on the floor. 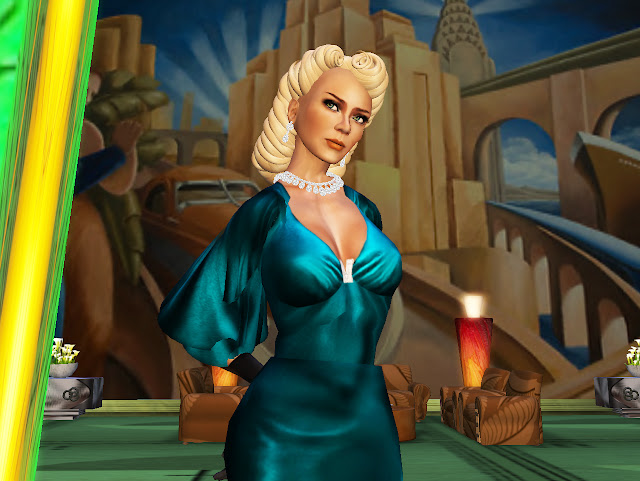 In keeping with the old Hollywood theme of OZ, we were asked to dress formally in the fashions of the 1920s to 1940s. I like how the invitation put it, 'dress accordingly if you can ... as if you were dating Katherine Hepburn or Cary Grant.' Lulubelle really captured the look of the period right down to the hair style. She looked fantastic. She's ready for her date with Cary Grant. 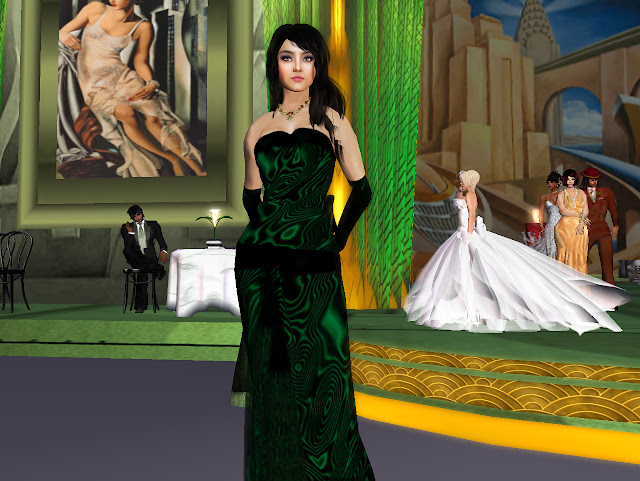 Well, my date wasn't with Cary Grant. But I did dance the evening with Jaysun. When he's not wearing summer shorts and flipflops, Jay can be very Cary Grant. And he was strikingly handsome that evening in his white tux. I was wearing a late 1920s green satin gown from the collection of designer Sonatta Morales called La Mer. Green satin to complement the emerald green of OZ. 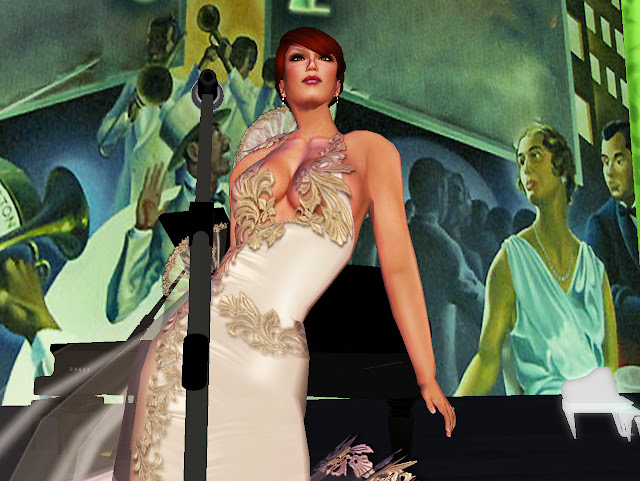 The two performers that Magie booked for the evening perfectly matched the night club's theme. Singer Jewels Osterham opened the evening's entertainment with her smooth voice and standards from the Great American Songbook. I'm a fan of Jewels Osterham and long a member of her group. So it was wonderful seeing her at OZ. 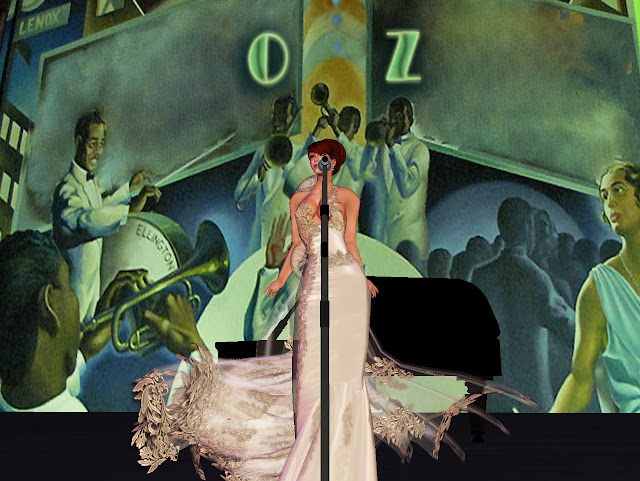 At the back of the stage, a mural of Duke Ellington and his Orchestra at the Savoy Ballroom provides a fabulous backdrop for the night's performers. Located on Lenox Avenue in the heart of Harlem in New York City, the Savoy Ballroom billed itself as 'The World's Finest Ball Room'. Opened in 1926, it was a place of elegance, and one of the first racially integrated public places in the country.  The burnished maple dance floor was a city block long and highlighted with colored spotlights and crystal cut chandeliers. And the ballroom was filled with the sounds of the best big band jazz in the world played by the likes of Count Basie, Louis Armstrong, Cab Calloway, Erskin Hawkins, Duke Ellington, Chick Webb, and Benny Goodman. But the ballroom was equally known for its dances.  The Savoy was the birthplace of the Lindy Hop, the Flying Charleston, the Big Apple, the Stomp, and the Jitterbug Jive, among others. The Savoy closed its doors in 1958. I'd like to think that OZ could be the Second Life successor to the legendary Savoy Ballroom. 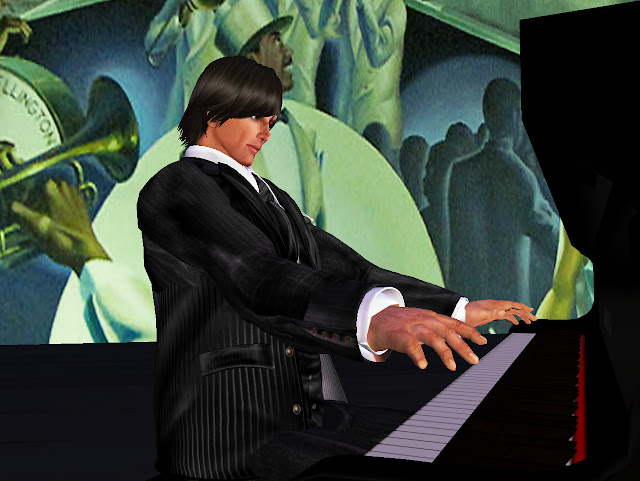 Ms. Osterham was followed on stage by my Second Life neighbor, Zachh Cale, instrumentalist, singer, and composer. I've enthused in previous posts on this blog about how entertaining and charming he is. I'll do it again here. Zachh is sooo entertaining and sooo charming. There, I got that out. At OZ, Zachh included  songs by Cole Porter in his set. Zachh Cale and Cole Porter ... what a wonderfully perfect combination. 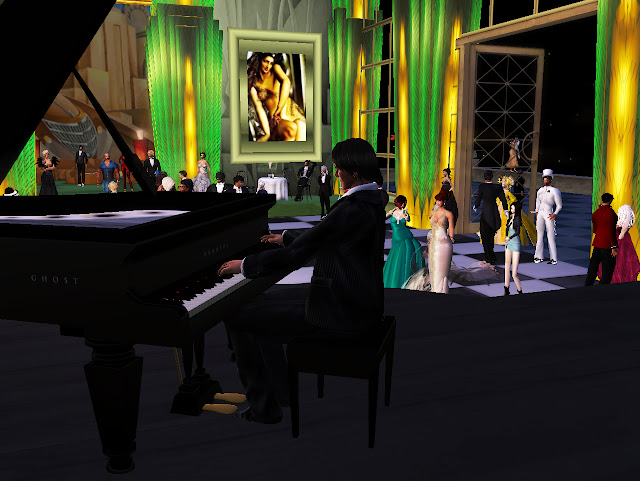 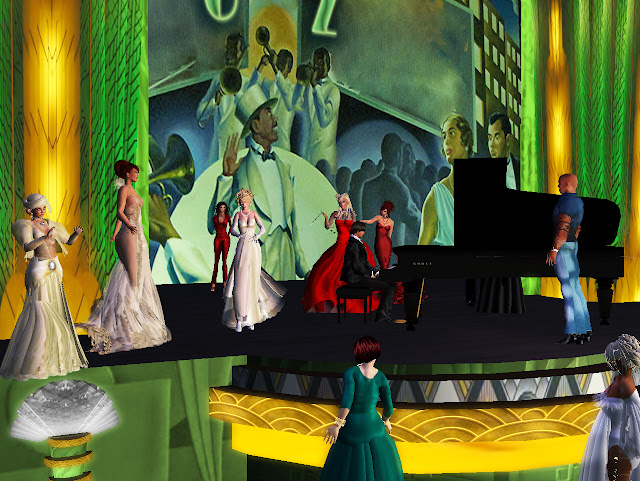 In a moving conclusion to the night's entertainment, Zachh invited the audience to join him on stage.

Calas Galahon Park is an amazing 10 sims open to the public through the generosity of Truck and Tymus - 'these sims are a gift to our friends and SL family, to provide a spot to sit back, enjoy and find some peace amidst the beauty of our natural world brought into Second Life.'  Join the Caladhon Announcement Group at the park's landing point to be advised of events at the park.
http://slurl.com/secondlife/Calas%20Galadhon/142/230/22

What better way to end this post than with Judy Garland capturing our hearts in The Wizard of Oz:

Posted by Mariko Nightfire at 12:20 AM

Welcome to Mariko Nightfire: A Virtual Life. Mariko Nightfire is the name of my Second Life self. Mariko is also my name in real life. I’m a Japanese-American girl from Hawaii and a graduate student at a university in the northeast. As an extention of me, so is Mariko Nightfire. But, she is far more than an extention. She is the Mariko in Wonderland. This blog records her adventures in wonderland and my thoughts on Second Life's culture and development. Her's is truly a fully realized life being lived in that alternative universe of pixels. In addition to Miss Nightfire's personal diary, my blog has an number of special features:
.
Mariko Magic: These are my fashion posts. I love the world of fashion in Second Life. There are some wonderful talents creating exceptional fashion in Second Life. This feature highlights them and their most magical creations. These posts also appear on my fashion blog : Mariko Magic - Fashion in Second Life.
.
Cheesecake Mariko: Mariko is cute and sexy - a pinup girl. This feature has Mariko at her cutest and sexiest.
.
Photo Mariko: I fill my postings with colorful pictures of the people, places, and events that are the subject of the post. But I have taken some pictures that do not make it into my regular posts and are interesting enough to share with you. I'll place those pictures in this feature.

Thank you so much for reading my blog - Mariko Nightfire
..

Shantu Selene (Play my favorite, Dance With Me)

Second Life® and Linden Lab® are trademarks or registered trademarks of Linden Research, Inc. All rights reserved. No infringement is intended.